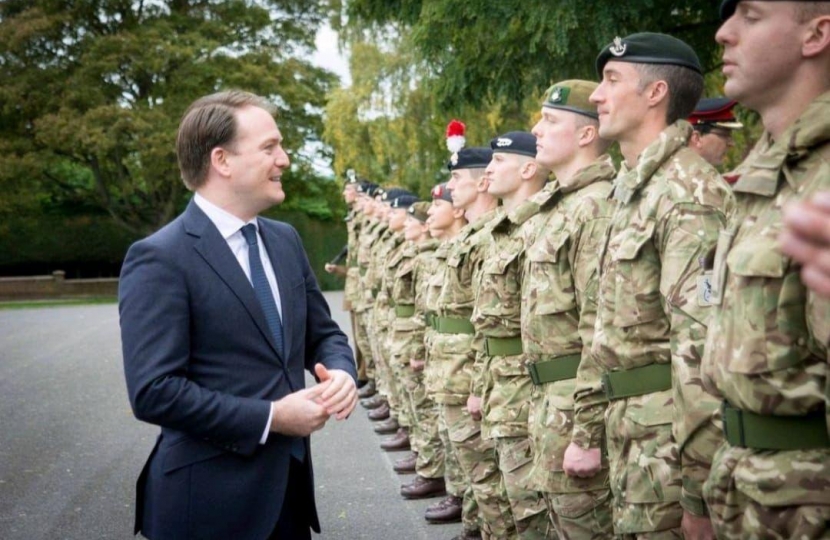 Gareth Davies MP has today welcomed the decision of the Ministry of Defence to defer the decision to close the Prince William of Gloucester Barracks until 2028.

Commenting on today’s announcement by the Defence Secretary Ben Wallace in the House of Commons, Gareth said:

“The Prince William of Gloucester Barracks has been in Grantham for 45 years and I am pleased to hear the news that the Ministry of Defence has deferred the planned closure of the site from 2024.

The barracks is a fundamental part of our community. Only recently I was honoured to attend the passing out parade of the Army Training Regiment Grantham to present awards to outstanding recruits on completion of the Reserve Phase 1 training. Grantham will continue to be a hub for the Army Reserve, equipping recruits with core skills to enable them to begin their service.

As the Headquarters of 2 Operational Support Group, Royal Logistics Corps, the barracks played a key role in the development of the mobile testing programme as mobile test centres were assembled at the barracks before being dispatched across the country. This was an immense source of pride for the town which demonstrates the value of holding military personnel at the centre of the community

I hope that today’s announcement will provide some greater certainty for those people currently living and working at the barracks and I look forward to continuing the close relationship between Grantham and the armed forces.”

Gareth Davies MP has welcomed today's announcement that Harper's Law will be carried into law, introducing mandatory life sentences for those who kill an emergency worker in the course of their duty.