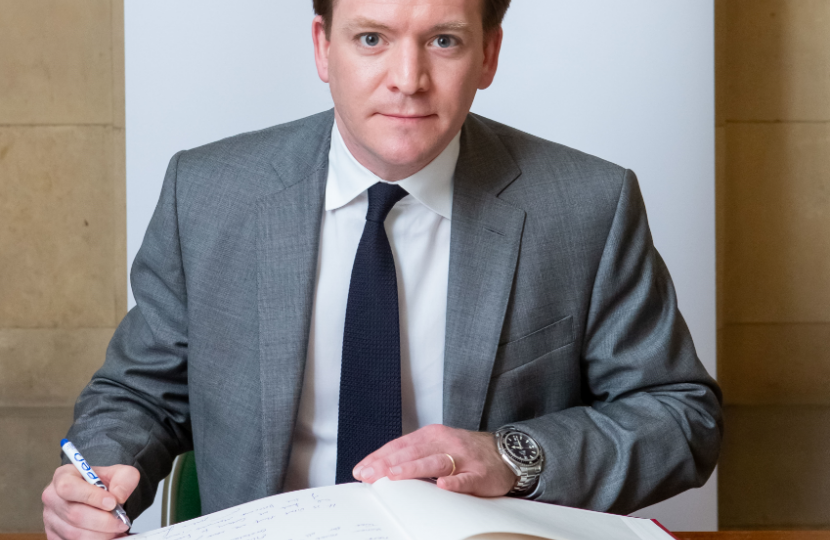 This week Gareth Davies signed the Holocaust Educational Trust’s Book of Commitment, in doing so pledging his commitment to Holocaust Memorial Day and honouring those who were murdered during the Holocaust as well as paying tribute to the extraordinary Holocaust survivors who work tirelessly to educate young people today.

In the lead up to and on Holocaust Memorial Day, thousands of commemorative events will be arranged by schools, faith groups and community organisations across the country, remembering all the victims of the Holocaust and subsequent genocides. The theme for this year’s commemorations is ‘Stand Together’.

After signing the Book of Commitment, Gareth Davies MP commented:

“Holocaust Memorial Day is an important opportunity for people from Grantham and Stamford to reflect on the darkest times of European history. As the Holocaust moves from living history, to history, it becomes ever more important that we take the time to remember the six million Jewish victims and also pay tribute to the survivors.”

““As the Holocaust moves further into history, it falls on all of us to ensure that their stories and the stories of the 6 Jewish million men, women and children brutally murdered by the Nazis, are never forgotten. We all have a duty to remember the Holocaust and to stand up against antisemitism and hate, now more than ever.”

About the Holocaust Educational Trust

The Holocaust Educational Trust was founded in 1988 during the passage of the War Crimes Act. Its aim is to raise awareness and understanding in schools and amongst the wider public of the Holocaust and its relevance today. The trust believes that the Holocaust must have a permanent place in our nation’s collective memory.

Since 1999 the Trust’s Lessons from Auschwitz Project has given thousands of post-16 students and teachers the opportunity to visit the Nazi concentration and death camp Auschwitz-Birkenau as part of a four-part educational programme. Since 2006 the Project has received Government funding. In 2018, the Trust received Government funding for the Lessons from Auschwitz Universities Project, a special version of the Project aimed at addressing increasing concerns about antisemitism on campus.

Having played a crucial role in the establishment of Holocaust Memorial Day in the UK in 2001, the Trust continues to play a key role in the delivery of this national commemorative day.

In 2010 the Government issued a new award to recognise the British men and women who came to the aid of Jewish people and other persecuted groups during the Holocaust – as a direct result of an initiative by the Trust to raise their profile and secure formal recognition for them.

At the Holocaust Educational Trust’s Appeal Dinner in September 2013, the Prime Minister announced the establishment of a national Holocaust Commission to establish what further measures should be taken to ensure a lasting memorial to the Holocaust in this country. In January 2015, the Prime Minister, with cross-party support, endorsed the Commission’s recommendations, which include a striking new national memorial and accompanying learning centre by 2022.

In 2015, the Chancellor of the Exchequer announced that the Royal Mint has commissioned a special commemorative medal to mark 70 years since the end of the Holocaust, an initiative of the Holocaust Educational Trust.

In July 2017, the Holocaust Educational Trust supported a visit to the former Nazi concentration camp Stutthof by Their Royal Highnesses The Duke and Duchess of Cambridge where they met with survivors of the camp Zigi Shipper and Manfred Goldberg. This high-profile initiative helped to shine a spotlight on the importance of ensuring that the Holocaust is never forgotten.

In 2018, the Trust marked the eightieth anniversary of the Kindertransport with Stories from Willesden Lane, a unique educational project which engaged more than 8,500 students across London with an innovative programme of resources and events which enabled them to reflect on the experiences of Jewish child refugees. In the same year, the Trust partnered with Chelsea Football Club in its Say No To Antisemitism campaign.

In 2020 we will remember 75 years since the end of the Second World War and the liberation of the camps. The Trust and UCL Centre for Holocaust Studies, with support from the National Holocaust Centre and Museum, and funding from the Department for Education, will deliver Belsen 75 – a commemorative and educational project allowing young people to mark the anniversary of the liberation of Bergen-Belsen by British forces on 15th April.

The trust work in schools, colleges and higher education institutions across the UK, providing a wide range of educational programmes.

For further information on how your school could benefit from the programmes available, please visit the Holocaust Educational Trusts website at https://www.het.org.uk/education

Human compassion comes to the fore in a crisis

Our country and the whole world now face a fight against an invisible killer. These are extraordinary times that require an extraordinary response.