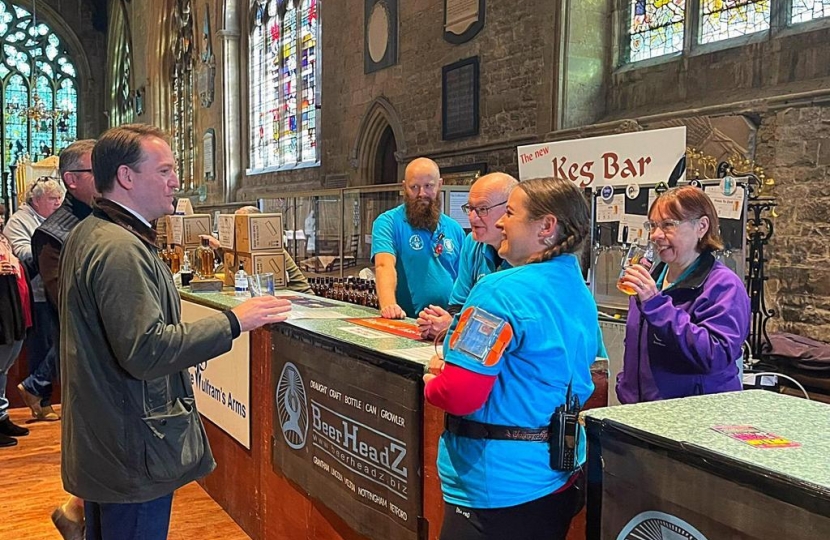 Today, Gareth visited the CAMRA Beer Festival at St Wulfram's Church, Grantham to meet local brewers from the constituency and experience yet another ingenious use for an historic Grantham landmark.

With twelve local ales on offer, among a host of ciders and meads, it was fantastic to see so many people supporting traditional craft and to meet representatives from the local branches of the Campaign for Real Ale (CAMRA).

Recently, the Autumn Budget confirmed that duty rates on beer, cider, win and spirits will be frozen for another year, a move which will save consumers £3 billion over the next five years. A radical simplification of the duty system will reduce the number of main rates from 15 to 6, and tax products in proportion to their alcohol content. This will build on the introduction of the Small Brewers Relief, which will benefit cidermakers and other producers of lower ABV drinks, allowing local producers to diversify their product range below 8.5% ABV while still benefitting from reduced rates.

The introduction of a Draught Duty rate is a gamechanger for cask beer drinks, cider and perry drinkers and the Great British local.

This is something CAMRA has campaigned on for many years and we are delighted that the government has listened, supported our locals and introduced the important principle that beer, cider and perry served in a pub or social club should be taxed at a different rate to alcohol bought at places like supermarkets.