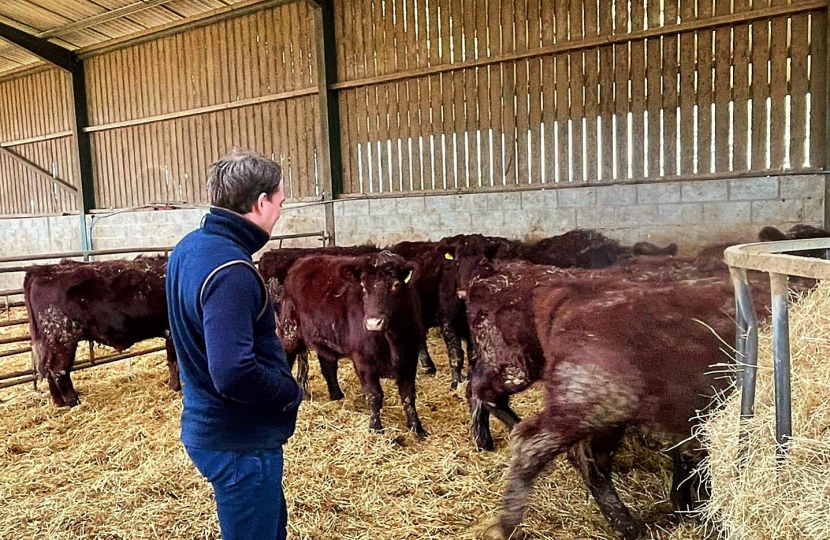 Grantham and Stamford MP, Gareth Davies is continuing to fly the flag for local produce by highlighting the international demand for Lincolnshire beef.

Lincolnshire Red Cattle are an ancient breed with a storied past, being descended from stock brought over by viking invaders over one thousand years ago. With their red coats and heavy build, they have been farmed around Lincolnshire for centuries and have been exported to form herds in the USA, Argentina, and Australia. Today, they are recognised as being a hardy and fast growing breed which produces delicious, marbled beef for the table.

After visiting a local farm to hear about the resurgence in sales of Lincolnshire beef, Gareth said:

‘Lincolnshire is famed for its agricultural excellence, contributing over £1 billion each year to the nation’s economy. Our cattle farms should be commended for their commitment to raising this iconic local breed, whose quality is rightly recognised across the world.

I firmly believe that we should all make an effort to shop locally to support Lincolnshire’s farmers with peace of mind that our meat is produced to the highest standards of animal welfare and environmental protection.’

On Monday, we heard from the Prime Minister that the spread of the new ‘Delta’ variant of COVID has resulted in Government deciding to decelerate the roadmap out of lockdown in order to ensure that as many people as possible will have received a vaccine, and possess some immunity to the virus by