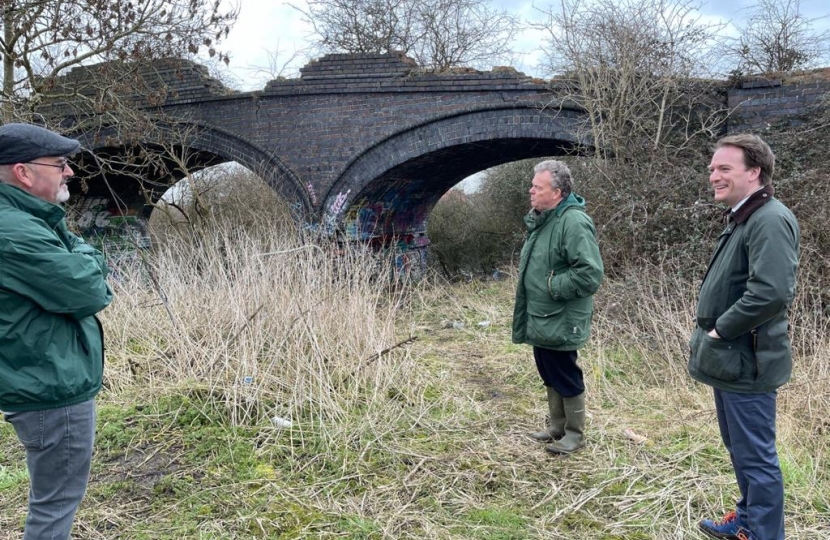 Gareth Davies MP has called for Bellway Homes to address the development of the Bridge 234 site in Bourne in a manner which pays tribute to our area’s railway heritage.

“I completely understand the concerns of residents and the campaign running to bring public attention to the plans for the Bridge 234 site. I have now held two separate virtual meetings with representatives from Bellway, as well as visiting the site with Elsea Park Trust representatives and the County Councillor, Robert Reid, to inspect the state of the bridge myself.

“While clearly the bridge is in an extremely poor condition after over 60 years without repair, I believe that it is right that we recognise the significance of Bridge 234 as a local landmark which represents Bourne’s special role in the fantastic Age of Steam.

“I appreciate Bellway’s plan to preserve the bridge’s footprint by using reclaimed bricks to construct a piazza. However, I have proposed additional measures to go further to help preserve the historical significance of the site.”

In written correspondence to representatives of Bellway Homes, Gareth Davies MP has called for the following measures to be considered in development plans:

1. Naming the park after Charles Stansfield Wilson - the engineer who supervised the construction of the railway line from Bourne to Saxby in the 1890s.

2. Information boards to be placed in the park to explain the importance of the bridge and the railways to the area. The information and narrative should be sourced in partnership with local historians.

3. Providing train-themed play equipment for the proposed playground so the next generation can learn about the site’s history through play.

STATEMENT ON THE DEATH OF HRH PRINCE PHILIP, THE DUKE OF EDINBURGH

It is with great sadness that I heard the news of the death of HRH Prince Philip, the Duke of Edinburgh. My first thoughts are with Her Majesty The Queen, to whom I have written to extend my condolences on the loss of her husband.