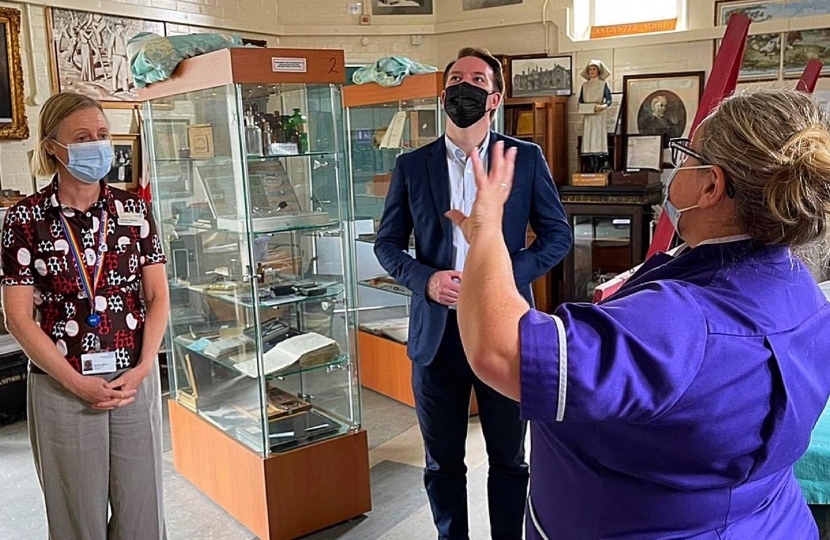 The latest statistics from our local vaccination centres make for very encouraging reading, especially as Stamford has seen the opening of a new centre in the former Volkswagen garage on Uffington Road. This coincides with the acceleration of the vaccination programme across the country with it estimated that two-thirds of the adult population will have received both vaccine doses by the 19th July.

At this pace, we are set to lift restrictions on the 19th of July. More than half of the under 30s have now taken up the chance to be vaccinated and I would again encourage everybody to book a jab and protect those around you.

I heard more about the vital work the NHS has been doing throughout the pandemic when I visited Stamford and Rutland Hospital last week. I was shown the facilities by Chief Executive of North West Anglia NHS Trust, Caroline Walker and the Matron Caroline Hill including the recently refurbished physical therapy room and a new MRI scanner.

It was also a great chance to learn how far hospitals have come in the last century as we looked inside the old fever wards, built in 1876 to help contain scarlet fever and other infectious diseases which were rife in the period. I’m certainly grateful that we can now receive the very best modern care and that the hospital has continued to adapt and develop so successfully over the last year.

Another group to whom we undoubtedly owe our thanks are the Armed Forces who we commemorated during Armed Forces Day on the 26th. I attended the flag raising at South Kesteven District Council and met a number of currently serving personnel to discuss the critical role they have served throughout the past year. From serving on the front line in the fight against Covid to battling terrorism and delivering aid overseas, our forces are Britain’s proudest representatives across the globe. This afternoon I am visiting the Prince William of Gloucester Barracks in Grantham to learn more about the operation of the Royal Logistic Corps and the Royal Lancers which are both based on the site.

Finally, as we all look forward to restrictions easing, being able to access community spaces becomes all the more important. I was honoured to join local government leaders at the newly refurbished Bourne Corn Exchange last week, as a building which has stood in the town for 150 years with myriad uses now enters a new phase of its life. I can only wonder what it will be used for 150 years from today!

The latest statistics from our local vaccination centres make for very encouraging reading, as the Meres Vaccination centre has now passed the milestone of 150,000 doses given. This coincides with the acceleration of the vaccination programme across the country with it estimated that two-thirds of the adult population will have received both vaccine doses by the 19th July. At this pace, we are set to lift restrictions on the 19th of July. More than half of the under 30s have now taken up the chance to be vaccinated and I would again encourage everybody to book a jab and protect those around you.

This week, I met with Homes England to discuss the current development plans for the Prince William of Gloucester Barracks site to the south east of Grantham. The site was allocated for development in 2020, with the intention to construct four thousand new homes on the site once it is vacated by the Ministry of Defence in 2024.

I have raised with Homes England my concerns about the reported loss of woodland as part of the current proposals and the significant impact on the local ecosystem which it entails.

I was partly assured that the plans include the planting of twenty-six hectares of new woodland with thirty percent of the site’s area to be given over to tree cover, including tree-lined streets and an accessible central park. However, I intend to stay close to this and will follow-up with Homes England once the results of the consultation which recently ended are published.

I will also be meeting with the Woodland Trust to discuss the plans and any potential mitigation strategies which can be employed on the site.

This column always provides an opportunity to champion local businesses and innovators. A recent meeting with Keith Ridgeway from Incredible Husk International Group demonstrated that Grantham is at the cutting edge of green technology.

Incredible Husk have pioneered a method which turns waste plant material into a plastic substitute that can be used to make anything from bottle tops to Lego blocks. Rather than disposing of the items at landfill, they can be broken up for the husk to be used as an organic fertiliser. Yet another landmark in Grantham’s long history of technological inventions!

350 years ago during the Great Plague, Sir Isaac Newton left his studies at Cambridge to return to the healthier Lincolnshire air at Woolsthorpe Manor.  It was here that he accomplished his best-known work on calculus and optics, scribbling notes in charcoal on his bedroom walls and also experien